Where is the Rongbuk Monastery located ? At the Base of Mount Everest ?

What are the Specialities of Rongbuk Monastery ? 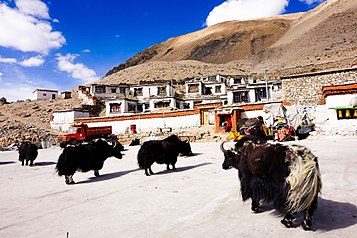 What is the Significance of Robgbuk Monastery ?

Describe the architecture of Rongbuk Monastery

In front of the Monastery, there is a large round terraced chorten containing a reliquary

Rongbuk Monastery with Mount Everest in the background

Rongbuk Monastery was founded in 1902 by the Nyingmapa Lama Ngawang Tenzin Norbu in an area of meditation huts and caves that had been in use by communities of nuns since the 18th century. Hermitage meditation caves dot the cliff walls all around the monastery complex and up and down the valley. Mani stone walls, carved with sacred syllables and prayers, line the paths

Describe the history of Rongbuk Monastery

The founding Rongbuk Lama, also known as Zatul Rinpoche, was much respected by the Tibetans. Even though the Rongbuk Lama viewed the early climbers as “heretics,” he gave them his protection and supplied them with meat and tea while also praying for their conversion. It was the Rongbuk Lama who gave Namgyal Wangdi the name Ngawang Tenzin Norbu or Tenzing Norgay as a young child

In previous times, the Monastery became very active with Buddhist teachings at certain times of the year. It was, and is, the destination of special Buddhist pilgrimages where annual ceremonies are held for spectators coming from as far away as Nepal and Mongolia

These ceremonies were shared with satellite monasteries across the Himalaya also founded by the Rongbuk Lama. These ceremonies continue to this day, notably at the Sherpa Monastery at Tengboche

The monastery’s vast treasury of books and costumes, which had been taken for safekeeping to Tengboche, was lost in a 1989 fire

Since 1983 renovation work has been carried out and some of the new murals are reportedly excellent. Adjacent to the monastery there is a basic guesthouse and small but cosy restaurant

According to Michael Palin, it now houses thirty Buddhist monks and thirty nuns,but another source reports that locals say there are only about 20 nuns and 10 monks, although previously there were about 500 monks and nuns living here.

In 2011, Rongbuk Monastery was ranked at the top of CNN’s ‘Great Places to be a Recluse’

MOUNT EVEREST : THE HIGHEST MOUNTAIN IN THE WORLD !